Walk on Tightrope Across the Niagara Falls 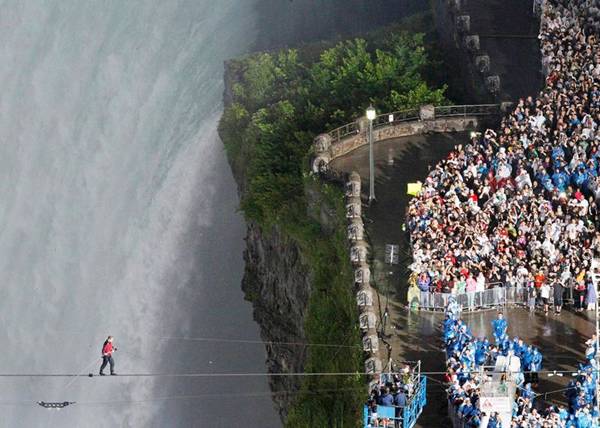 Daredevil Nik Wallenda became the first person to walk on a tightrope across the Niagara Falls, taking steady, measured steps Friday night for 1,800 feet across the mist-fogged brink of the roaring falls separating the U.S. and Canada. Afterward, he said he accomplished the feat through "a lot of praying, that's for sure. But, you know, it's all about the concentration, the focus, and the training." The seventh-generation member of the famed Flying Wallendas had long dreamed of pulling off the stunt, never before attempted. Other daredevils have wire-walked over the Niagara River but farther downstream and not since 1896. 09 more images after the break... 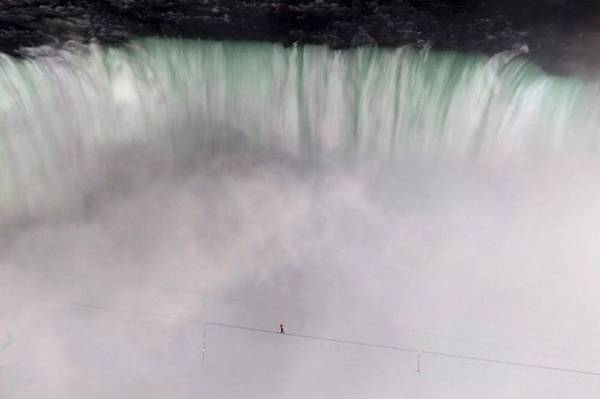 "This is what dreams are made of, people," Wallenda said shortly after he began walking the wire.
He took steady, measured steps amid the rushing mist over the falls as an estimated crowd of 125,000 people on the Canadian side and 4,000 on the American side watched. Along the way, he calmly prayed aloud.
ABC televised the walk and insisted Wallenda use a tether to keep him from falling in the river. Wallenda said he agreed because he wasn't willing to lose the chance and needed ABC's sponsorship to help offset some of the $1.3 million cost of the spectacle. 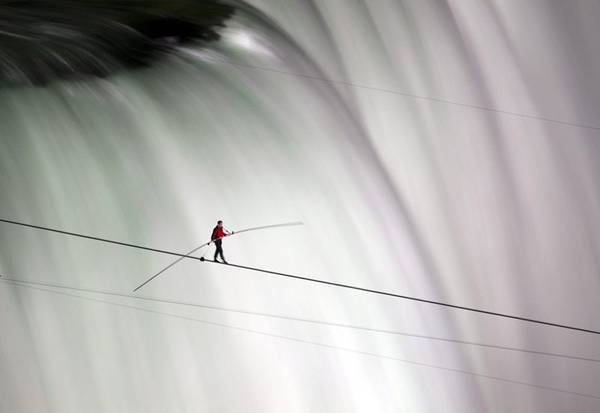 For the 33-year-old father of three, the Niagara Falls walk was unlike anything he'd ever done. Because it was over water, the 2-inch wire didn't have the usual stabilizer cables to keep it from swinging. Pendulum anchors were designed to keep it from twisting under the elkskin-soled shoes designed by his mother. The Wallendas trace their roots to 1780 Austria-Hungary, when ancestors traveled as a band of acrobats, aerialists, jugglers, animal trainers and trapeze artists. The clan has been touched by tragedy, notably in 1978 when patriarch Karl Wallenda, Nik's great-grandfather, fell to his death during a stunt in Puerto Rico. After he made it to the Canadian side of the falls, Wallenda said that at one point in the middle of the stunt, he thought about his great-grandfather and the walks he had taken: "That's what this is all about, paying tribute to my ancestors, and my hero, Karl Wallenda." 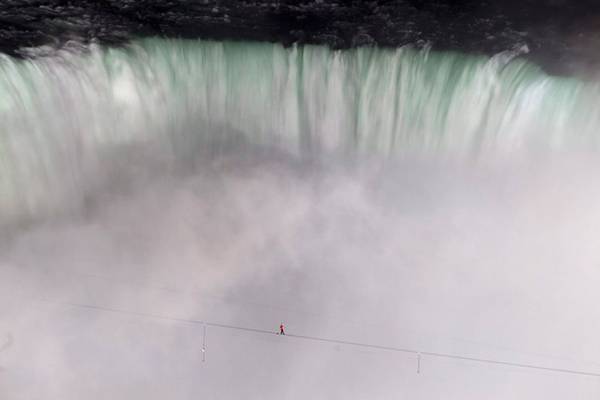 About a dozen other tightrope artists have crossed the Niagara Gorge downstream, dating to Jean Francois Gravelet, aka The Great Blondin, in 1859. But no one had walked directly over the falls, and authorities hadn't allowed any tightrope acts in the area since 1896. It took Wallenda two years to persuade U.S. and Canadian authorities to allow it, and many civic leaders hoped to use the publicity to jumpstart the region's struggling economy, particularly on the U.S. side of the falls. A festive crowd gathered on both sides of the border to watch Wallenda, spreading blankets and setting up folding chairs under picture-perfect blue skies and summer-like temperatures. 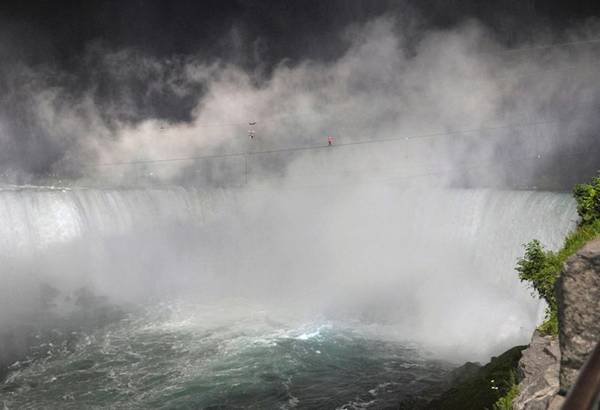 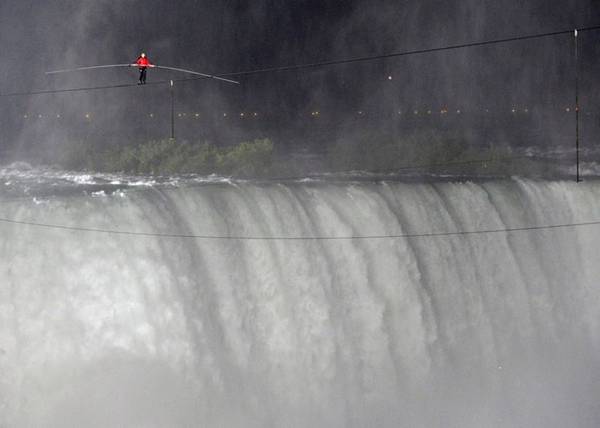 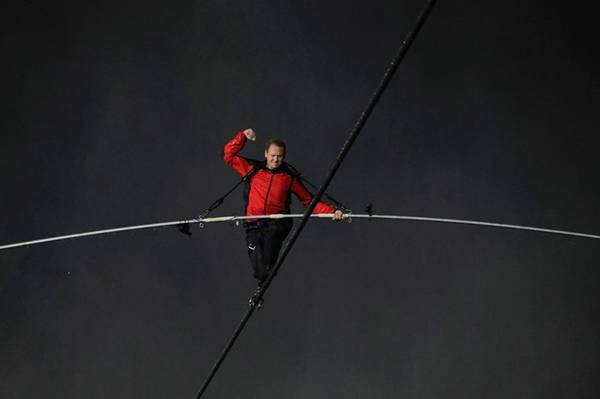 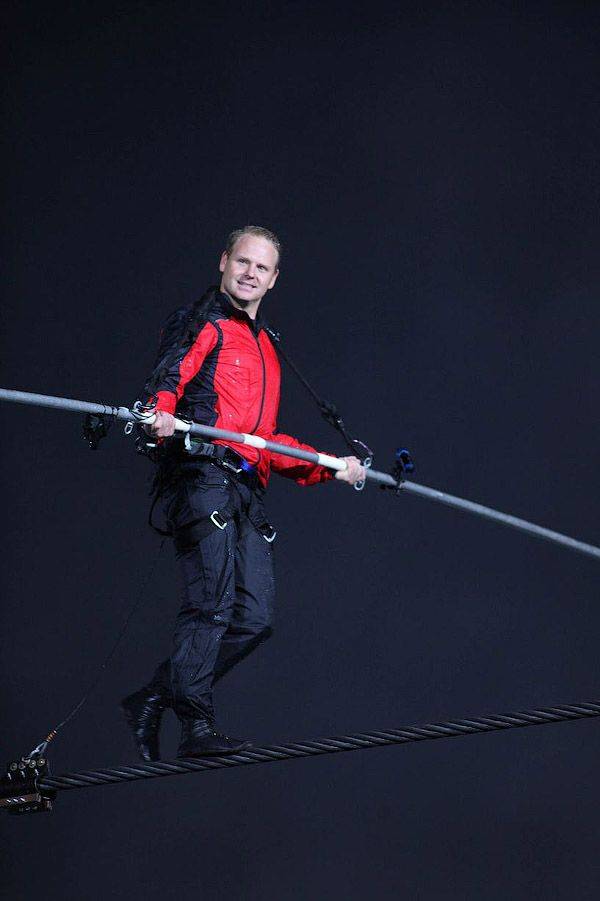 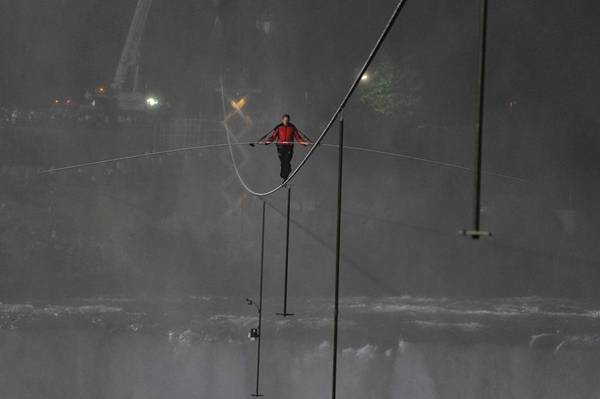 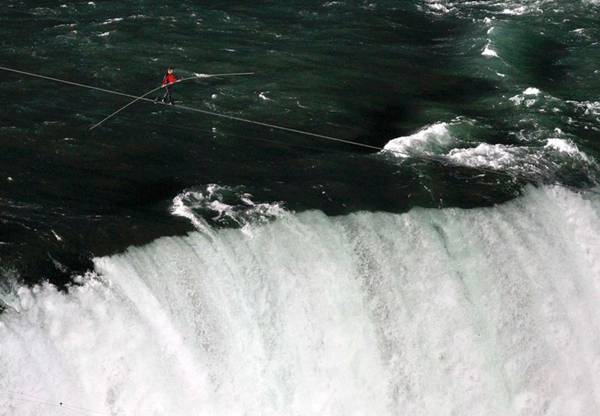