On the 50th anniversary of screen siren Marilyn Monroe's shocking death at age 36, check out the way stars like Mariah Carey, Nicki Minaj, Lindsay Lohan, Rihanna, and others have paid tribute to the blonde bombshell. -- Raechal Leone Shewfelt, omg! staff 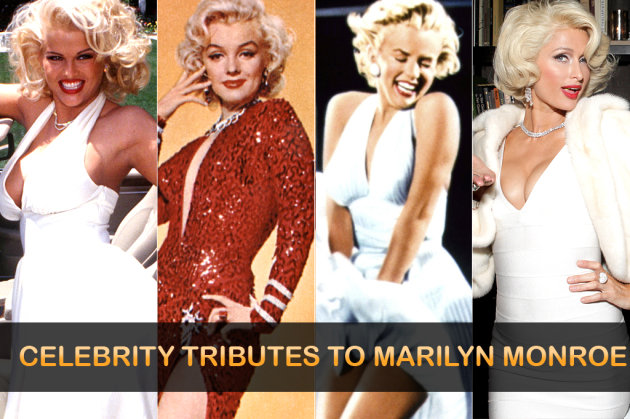 Check out the many stars who have paid tribute to Marilyn Monroe over the years. 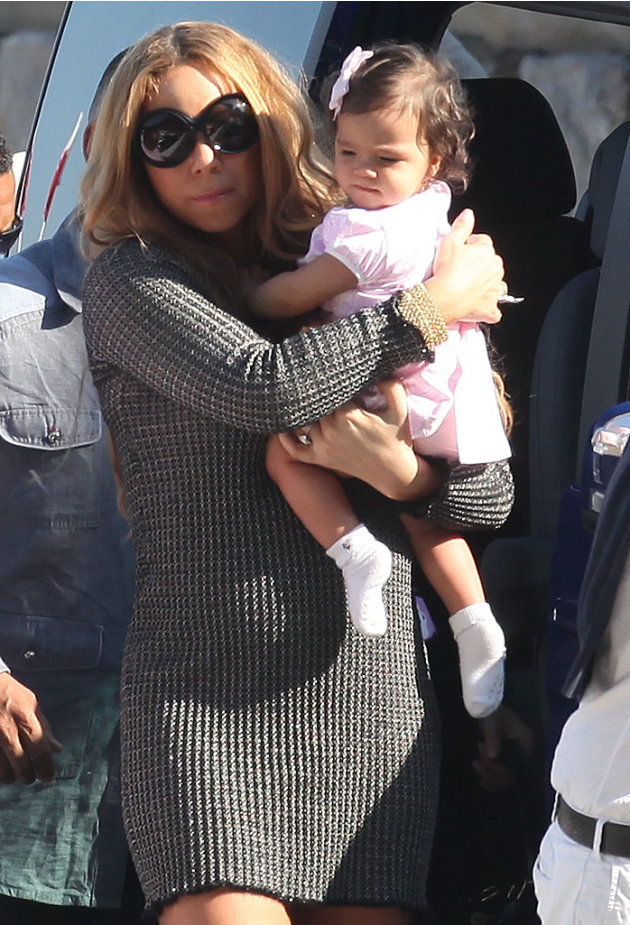 Mariah Carey admires Marilyn Monroe so much that she named her daughter after her! The singer and husband Nick Cannon welcomed Monroe and twin brother Moroccan Scott in April 2011. But years before that, in 1999, Carey paid tribute to Monroe by buying a white baby grand piano that once belonged to the "Gentlemen Prefer Blondes" star for more than $662,500 at a Christie's New York Auction. She's reportedly written it into her will that the piano will eventually go to the Smithsonian Institution, where it could sit alongside iconic items from pop culture like Judy Garland's ruby slippers from "The Wizard of Oz" and Henry Winkler's jacket from "Happy Days." 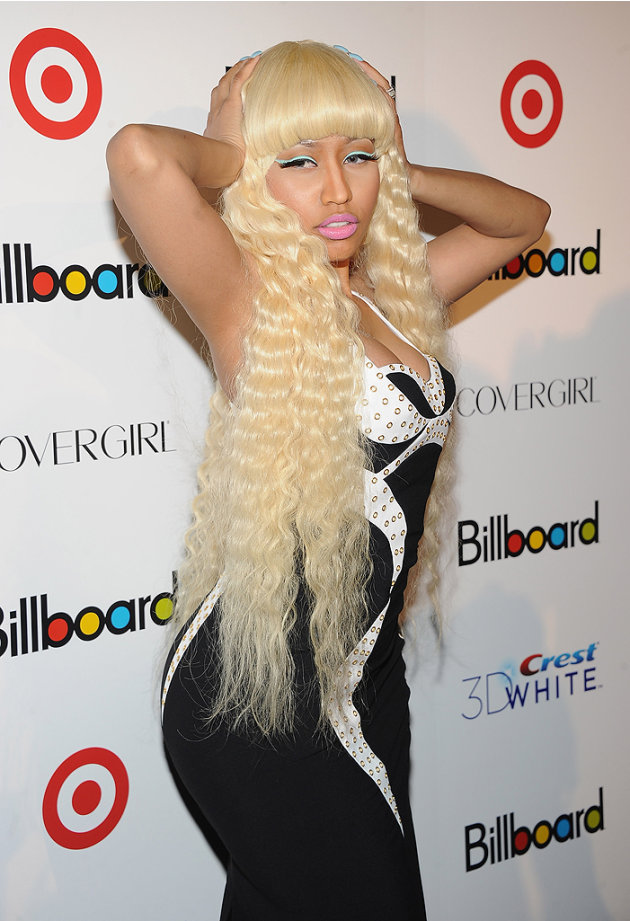 Nicki Minaj is known for fun and sassy songs like "Super Bass," but the artist bared her softer side in a tune called "Marilyn Monroe" that leaked onto the Internet in February. In it, Minaj confesses that she sympathizes with the late entertainer. "Is this how Marilyn Monroe felt?" she asks at one point. "Must be how Marilyn Monroe felt." The most iconic song written about Monroe, however, remains Elton John's 1973 track "Candle in the Wind," featuring lyrics like "Goodbye Norma Jean," a nod to Monroe's real name, and "Your candle burned out long before your legend ever did." Fifty years after Monroe's death, her legacy is stronger than ever! She ranked third in Forbes' most recent list of top-earning dead celebrities, with $27 million, behind only Michael Jackson and Elvis Presley. 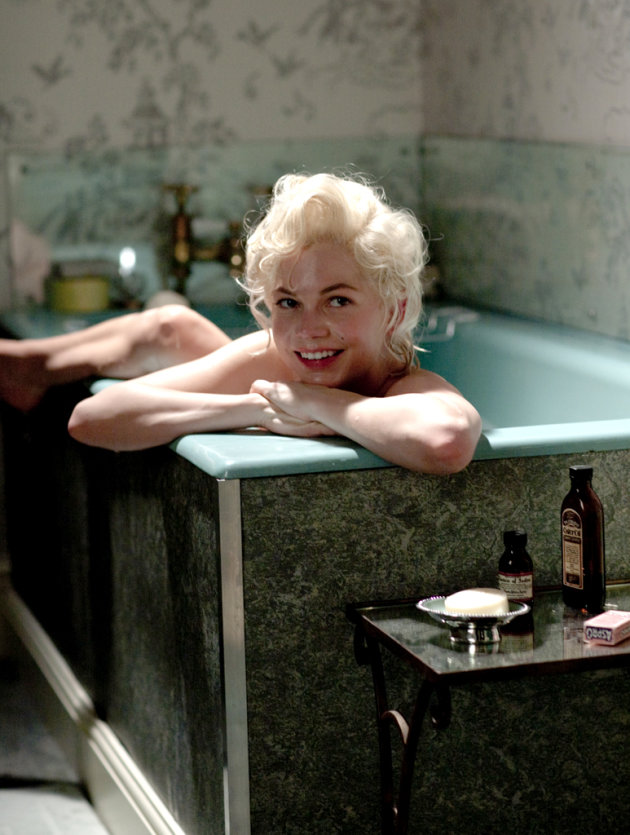 Countless actresses have portrayed Monroe on film or for TV (NBC's "Smash" or HBO's "Norma Jean and Marilyn," for example), but former "Dawson's Creek" actress Michelle Williams made the role her own in 2011's "My Week With Marilyn." She earned her third Oscar nomination for playing the former Norma Jeane Baker! The 31-year-old later confessed to plastering photos of Monroe on her bedroom wall as she was growing up in San Diego. "I had one of her in a field of trees in Roxbury, Connecticut," Williams told the L.A. Times. "She's wearing a white dress and she's barefoot and she’s got her arms spread and she's laughing. There was just something about that image of her — so lovely and joyful and free. I've always thought of her as that woman-child, not an icon, which is probably why I let myself approach the role." When Williams was cast in the Marilyn movie, she immediately began trying to master the way she walked and talked. "Is it too pretentious to say I feel I have a relationship with her?" she asked. "The more time I spend with her, the closer I feel to her." 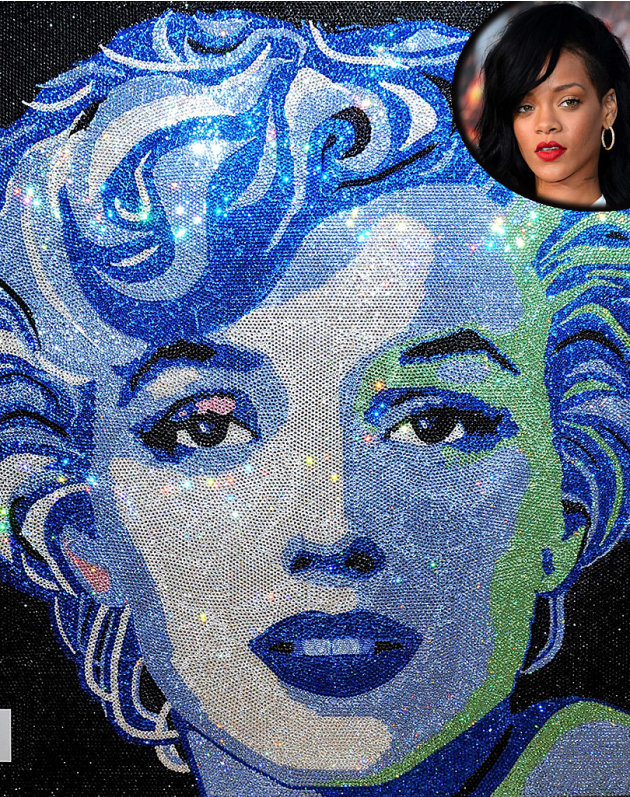 Most Monroe fans remember the actress by popping "Some Like it Hot" in the DVD player or reading a Monroe biography. However, most of us have a lot less cash than Rihanna. So when RiRi wanted to honor Monroe, she went all out. The Barbadian singer reportedly dropped $160,000 to commission a Monroe portrait made entirely of Swarovski crystals! The work of art is 5'5" tall and weighs 182 lbs., according to MTV. It features Monroe's expressionless face made of 65,000 little sparklers, and reportedly hangs in her L.A. home. 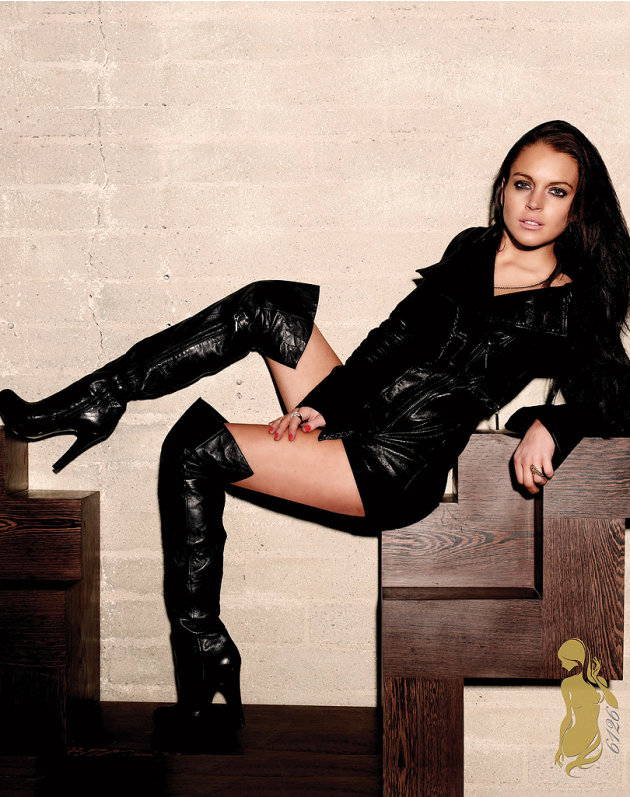 Lindsay Lohan has paid homage to Monroe more than once. She named her leggings line, 6126, after the date the late actress was born. The "Mean Girls" star had two Monroe-inspired quotes tattooed on her wrist: "I restore myself when I'm alone" and "Stars, all we ask for is our right to twinkle." In 2007, Radar Online reported that LiLo had purchased a Hollywood apartment where the buxom blonde once lived. Lohan also is one of the countless starlets who have posed as Marilyn for photo shoots, such as one she did for Playboy ... and again attributed to her idol. "Sex and sexuality are a part of nature, and I go along with nature,” Lindsay said in the magazine's interview. "I think Marilyn Monroe once said that. I certainly agree with her.... Knowing yourself and your body is so important because it gives you confidence, and in life, women need confidence." 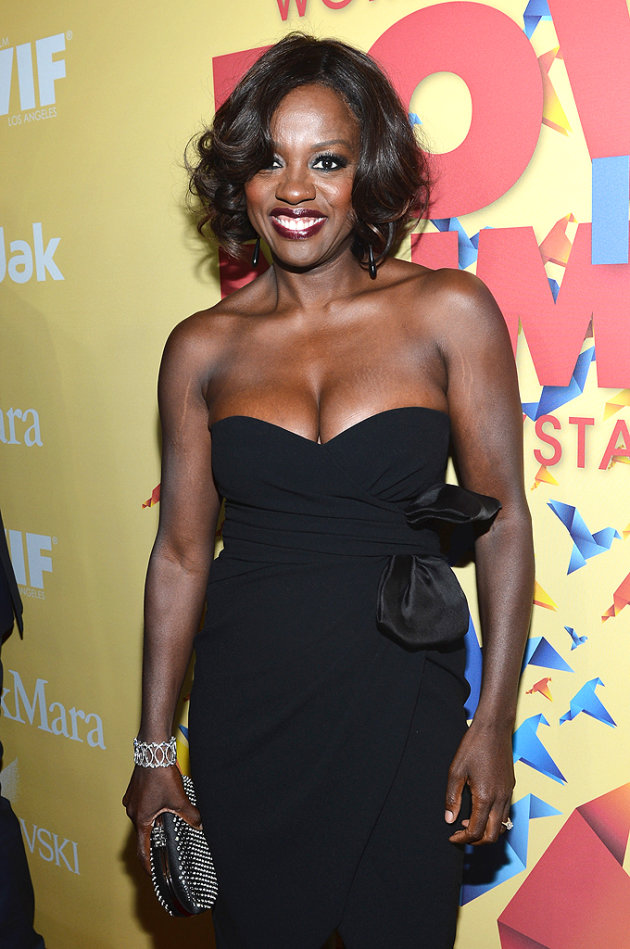 When the new documentary "Love, Marilyn" premieres next month at the Toronto International Film Festival, two time Oscar-nominated actress Viola Davis will be among the long list of celebrities who appear in the flick. Directed by Liz Garbus, who also helmed HBO's "Bobby Fischer Against the World," the movie examine two boxes of Monroe's private writings found at the home of her acting coach more than 50 years after her tragic death. In 2009, Davis also did a photo shoot styled as Monroe in a spread for Oprah's O magazine. 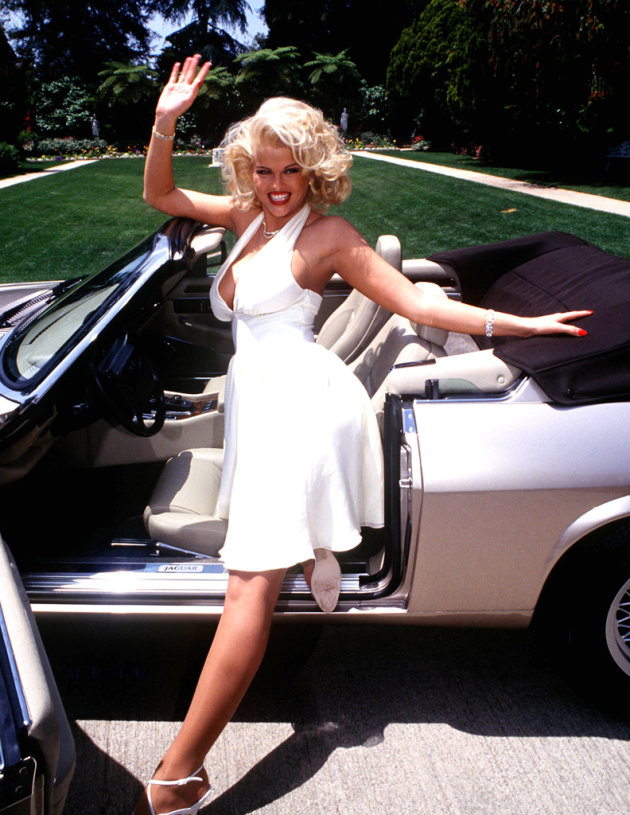 Anna Nicole Smith's entire schtick was built on the Monroe mystique — the dyed white-blond hair, the red lipstick, the voluptuous figure, and the little girl voice. The model-turned-reality star reportedly wanted to be "the next Marilyn Monroe." She once said, "I just love her. I just completely feel what she went through." Sadly, Smith had too much in common with the "Seven Year Itch" star. Like Monroe, Smith died young. In 2007, at the age of 39, she was found unresponsive in her room at the Seminole Hard Rock Hotel and Casino in Florida. Her death was later determined to be caused by "combined drug intoxication" from a cocktail that included a sleeping medication. 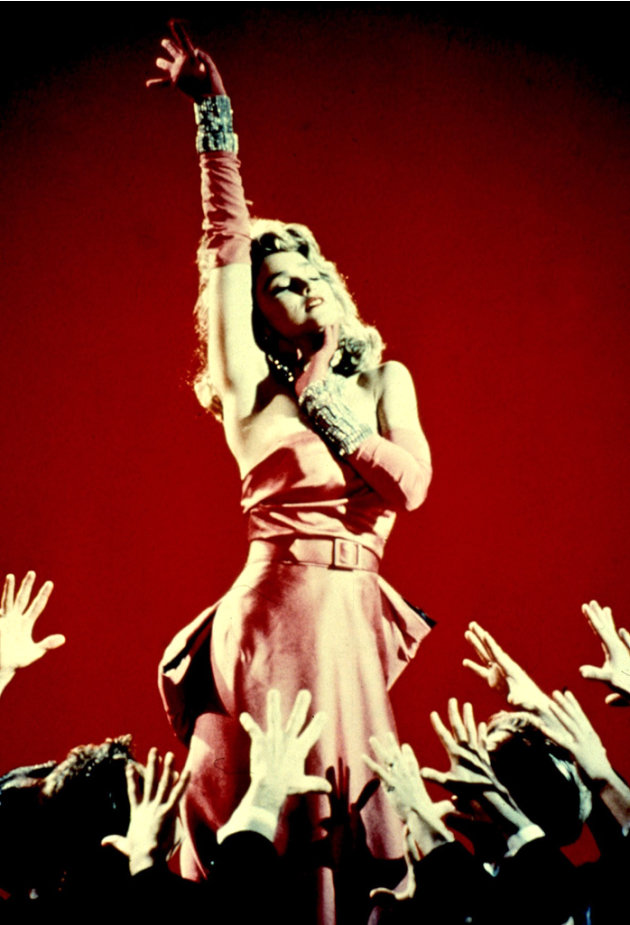 Pop legend Madonna's most iconic video is based on Monroe's performance of "Diamonds Are a Girl's Best Friend" in the 1953 movie "Gentlemen Prefer Blondes." Madge emulated Monroe's look in a fitted pink dress, piles of diamonds, and made sure to surround herself with a circle of men in tuxedos. Still, Madonna dismissed the idea that she was like Monroe back in 1992. "The main thing that we have in common is that we bleach our hair. She's a 'sex symbol' and a 'sex goddess' and I can relate to that in terms of how many people like to see me," she explained to Smash magazine. "I kind of like to take that imagery and what everybody’s preconceived notions of what a sex goddess is supposed to be and turn it all around. Throw it back in your face and say, 'Yes, I can be this sex symbol, but I don't have to be a victim, and I don't have to be fragile.'" 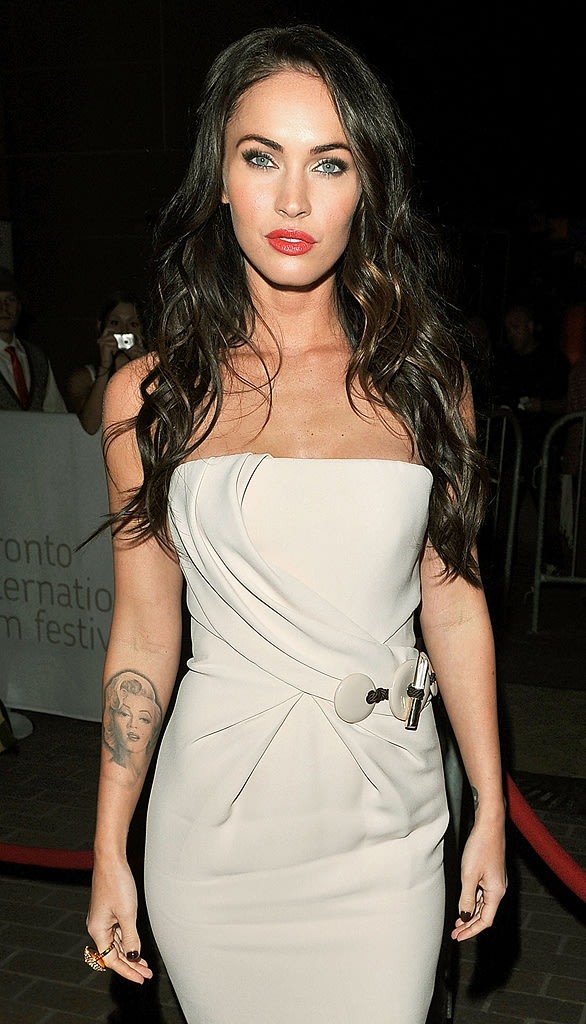 Like Marilyn, Megan Fox has earned a reputation of being one of the more difficult actresses to work with on set and is a favorite of men. But the 26-year-old "Transformers" actress claims to have had a connection with Monroe long before Fox made her way in Hollywood. "She was one of the first people I saw on television, like, literally moments after I was born," Fox has reportedly said. "Every time I heard her voice growing up I always would cry. I wouldn't know why when I was younger, but had my own theories. I've just always empathized with her." Many years later, Fox was still obsessed, and famously had the late actress' face tattooed on her right forearm as a tribute. By 2011, however, Fox had a change of heart, and confirmed that she was in the process of having the Monroe tattoo and several others removed because her tastes had changed. "This is going to be the least painful one to take off," she explained on "The Tonight Show With Jay Leno." "She doesn't look so good anymore!" 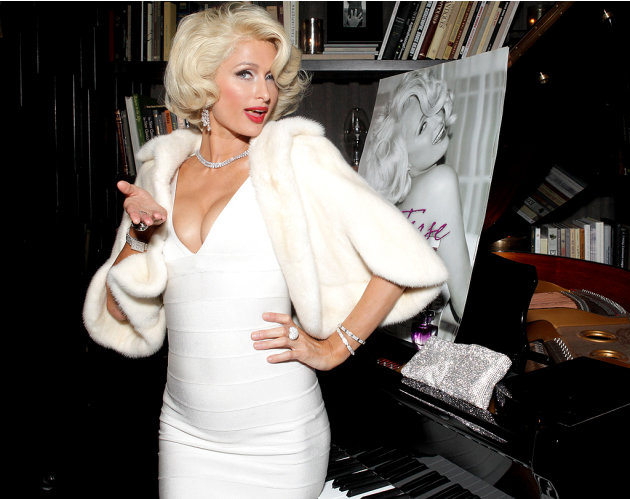 Paris Hilton obviously thinks a lot of herself, and she thinks so much of Monroe that she'd put herself in the same category! She dressed like Monroe in the "Diamonds Are a Girl's Best Friend" number for the premiere of Hilton's movie "The Hottie and the Nottie" in 2008. Two years later, the hotel heiress donned a curve-hugging white dress, faux fur, diamonds, and retro hair and makeup as a nod to the actress at the launch of her Tease perfume inspired by Monroe. "I have loved [Monroe] ever since I was a little girl," Paris said at the time. "I just thought she was the most beautiful woman, the camera loved her, and onscreen she was like no one else. Calling her a tease was something fun, because she was such a flirt." She opened up more about her admiration for the screen goddess in an interview with the U.K.'s Sunday Times. "I think every decade has an iconic blonde - like Marilyn Monroe or Princess Diana - and right now, I’m that icon." Hmm, but it's not likely people will remember "The Hottie and the Nottie" in 50 years!
at August 12, 2012