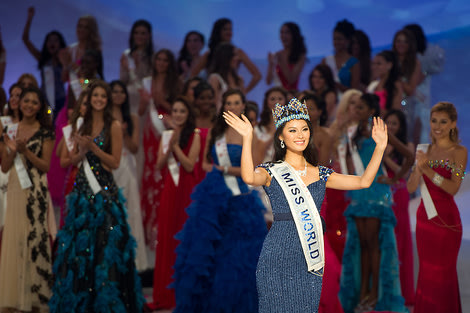 This past weekend 116 contestants gathered in the remote town Odros City in China's Inner Mongolia district for the annual Miss World Pageant.


Representatives from countries around the world, including South Sudan, Guatemala, The Netherlands and the U.S., formed a kind of United Nations summit on bathing suits and ball gowns.
PHOTOS: The weirdest beauty pageants in recent history

So it stands to reason, when China's Wenxia Yu was crowned as the winner on Saturday, not everyone was in agreement.
"I was not surprised at all to see that the winner of the pageant was Miss China given that it was held in a Chinese city with Chinese hosts and a huge group of screaming Chinese fans that erupted into applause every time she was mentioned," one commenter wrote on a Huffington Post article announcing the winner. He also added the hashtags: "#Rigged #Fake #SecondPlaceOlympicsRebound"
A Daily Mail reporter also caught the Olympic connection, cheekily congratulating China on its Miss World win over the U.S., after its London losses last month. Was this really a staged win or are we all just sore beauty pageant losers? A request for a comment from Miss World's London-based staff wasn't returned at press time.
After Wenxia's win, the Miss World Facebook page practically lit up with angry commenters accusing judges of pandering to politics.
"MWO you sold miss world for the Chinese! They poured MILLIONS into the contest, so it is not very surpris[ing] that they won," wrote one commenter among a chorus of hundreds slamming Yu as a "fake" winner.
Wenxia is the second winner from China in the contest's history, after Zhang Zilin's win in 2007. Both Yu and Zilan won their titles when their home country served as host to the awards. For that reason, critics wonder whether Miss World's judges were swayed by China's hosting duties. 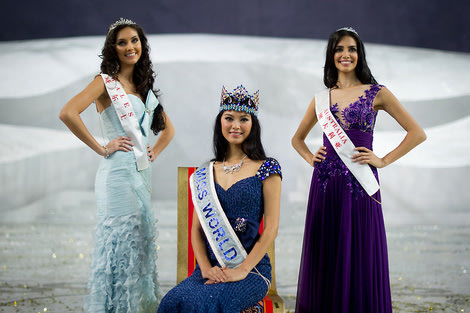 China's Wenxia with first runner-up Sophie Elizabeth Moulds of Wales and second runner-up is Jessica Michelle  …
Although news of the Miss World pageant may have passed many Americans by, the contest remains as popular as Donald Trump's Miss Universe across Asia.
Established in 1951 in the United Kingdom, it's the oldest major international beauty contest on the planet with Oscar winner, Halle Berry and Wonder Woman Lynda Carter, among its alumni.
To enter Miss World, contestants in the U.S. and in many other countries are selected by modeling agencies, rather than pageant judges, in order to participate. This year's representative, UCLA student and exotic bird collector Claudine Book, competed in all five categories -- talent, fitness, swimwear, evening wear and the charity-driven "beauty with a purpose" division- and won zilch.
Wales' Sophie Moulds, a Kate Middleton lookalike, took second place. If skeptics are questioning China's win, they should also consider the fact that Moulds and the contest's creators share a British commonwealth bond. The BBC broadcast the contest more prominently, than any network in the States. (It aired on E! On Sunday at 8 am.)
Before the crowning event, Miss Mexico had been the bookie's pick for winner with Miss Philippines earning her own fan base, after her beat-boxing performance during the talent competition went viral.
But it was 23-year-old Wenxia, a music student and dumpling fanatic according to her Miss World profile, who won the talent competition with her vocal performance, and ultimately the year-long Miss World tenure.
The real winner of the competition may have been the host city Ordos, a resurrected "ghost town" that fell short of being "the next Dubai" with the global financial crisis. "I had never heard of Ordos, but I've been very impressed by it so far," said Tapiwa Anna- Marie Preston, Miss Botswana in a press conference.
With the world watching, the largely unpopulated area drew international attention, despite controls on media access.
"It seems Ordos, which has made global headlines for building a giant new city with hardly any residents, is now intent on controlling exactly how it is seen by the rest of the world," writes Women's Wear Daily's Kathleen E. McLaughlin. The fashion trade paper was on location covering a portion of the contest when, according to McLaughlin, "a contingent of threatening men in plainclothes and uniformed police followed and chased a reporter from WWD to the Ordos airport after just 48 hours in the city." Authorities also questioned contacts and sources McLaughlin interviewed for her story.
It's unclear what exactly city officials were trying to protect from the media. But one thing is apparent: Both the city of Ordos, and the new Miss World, have gotten more attention than they bargained for. It's a lesson so many scandalized pageant winners homegrown in the States have learned in years past. Winning isn't everything.