Top 10 Most Creative Crosswalks in the World

Various companies use creative crosswalks in advertising campaigns to draw the attention of their customers. Installing a crosswalk is one of the easiest and quickest ways to calm traffic in your community. Crosswalks can be transformed into something that actually enhances the beauty and vibrancy of the surroundings. These can be simple yet elegant way to make cities more walkable and pleasant to live or perhaps can be used for advertising and send out a message. 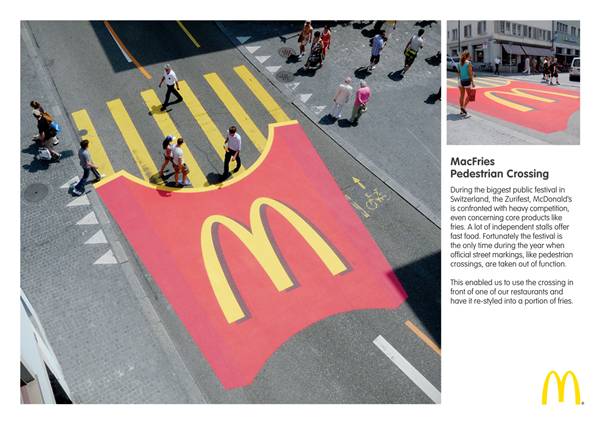 During the July 4th weekend festival of Zurifest in Switzerland, McDonald found itself competing with various street food vendors and wanted to capitalize on the increase in foot traffic. Advertisement firm TBWA Switzerland developed a unique campaign to attract pedestrians to the fast food chain by transforming a crosswalk into a super-sized serving of fries. It was super and creative idea.
They turned pedestrian crosswalks in front of their restaurants into giant French fry art. During the festival, streets are turned into pedestrian thoroughfares, enabling the use of the crosswalks for promotional purposes.
09 more Cross Walk after the break... 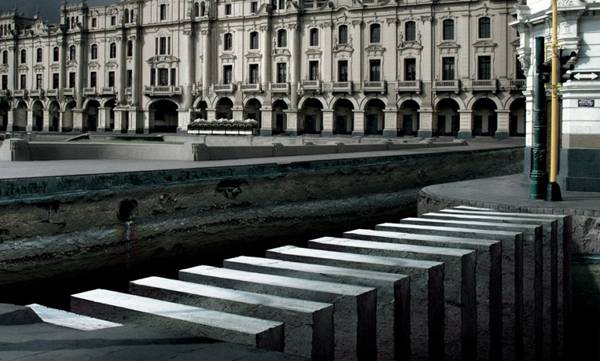 A print advertisement campaign was launched in Peru to promote the famous insurance company -Latina Insurance. The campaign aims at conveying that a person is fully secured in his risks infested life as it provides support to fight any danger. The campaign is showing unusual zebra-crossings while engulfed with threats such as crocodiles, abyss and snakes depicting that if a person with the insurance can easily cross the roads or risks. The idea is definitely refreshing and original but the campaign has not been equally effective in its presentation. However, the photography of the campaign and exotic locations are really fantastic. The campaign is actually a visual delight and is one of the most creative crosswalk ads in the world. 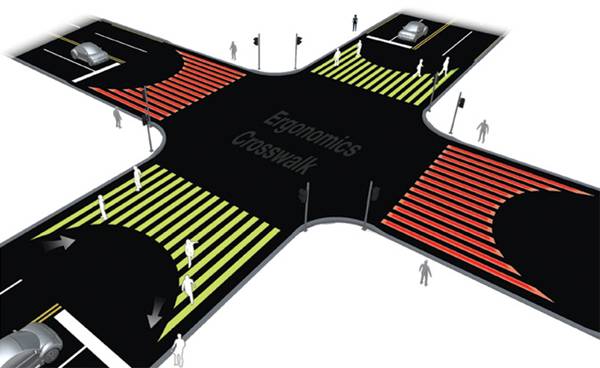 One of the shortlisted entries in the Seoul International Design that stood out was the ‘Ergo Crosswalk’ by Korean designer Jae Min Lim. In his project, Jae Tweaks the traditional shapes of Zebra crossing into curves to reflect how people jaywalk on roads. He believes that by carving out a wider road area, there will be fewer accidents involving pedestrians. Moreover, the Zebra stripes will have built-in LEDs that glow red or green to indicate when it is safe for people to cross. When people cross roads, they tend to take the fastest shortcut. They sometimes do it deliberately, but mostly it is an insensible act. This kind of action violates the traffic regulations and sometimes threatens the safety of the pedestrians. The ‘ergo crosswalk’ is a design that makes people follow the law, as well as consider their habits or unconscious actions. It will encourage pedestrians to follow the lines of the cross walk and protect them from any possible danger. If regulations cannot force people to follow the law, wouldn’t it be more reasonable to change the law and fulfill the main purpose of keeping the safety and convenience of the pedestrians. 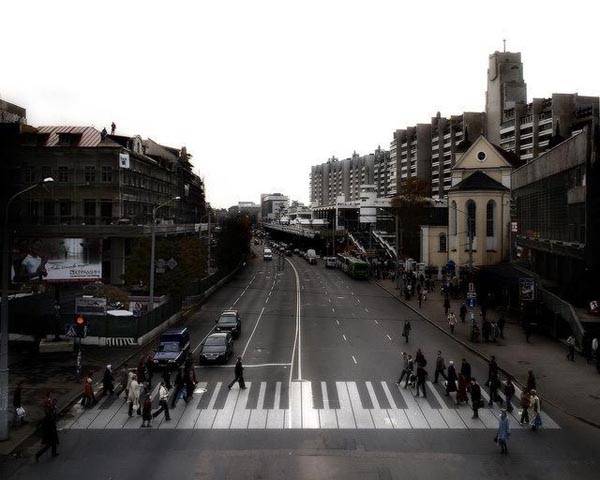 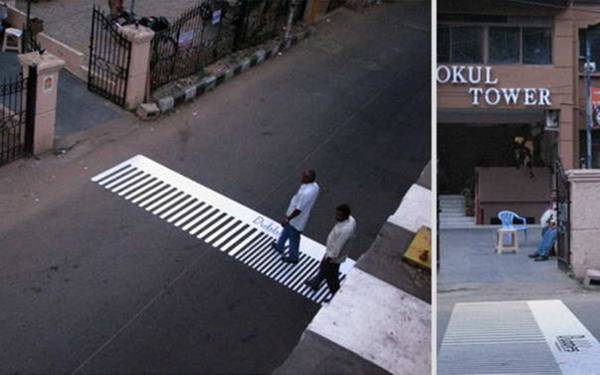 To create a buzz around Bubbles in the neighborhood, during the weekend a comb-shaped zebra crossing (a temporary transparent sticker) was stuck adjacent to the hair salons in Rome Italy. The purpose of this advertising was to indicate the location of salons and make the area prominent. Bubble hair salon is tucked away near a flyover in Alwarpet Chennai. Although its location is not a handicap. The ambient challenge was to create a buzz around bubbles in the neighborhood. This idea was appreciated and tried to replicated in other parts of Italy which not only enhanced business but always earned a good fame but also attracted lots of fashion loving people across the country. 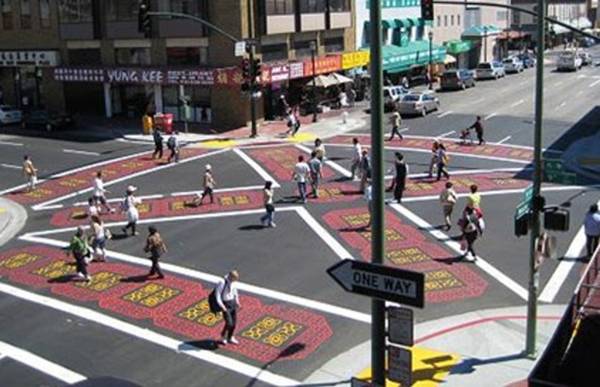 This ad is located in Loss Angles. It makes crossing easier for pedestrians by letting them to get across an intersection diagonally and they don’t need to walk twice, and is safer as there are no cars trying to turn while they are crossing. The city’s first diagonal crosswalk was unveiled as part of Mayor Antonio’s plan to reduce gridlock. The new crosswalk allows pedestrians to walk diagonally through an intersection rather than cross twice. The mayor first announced plans for the diagonal crosswalks, similar to those in Beverly Hills and Pasadena, in January as one of his short-term efforts to reduce traffic congestion. 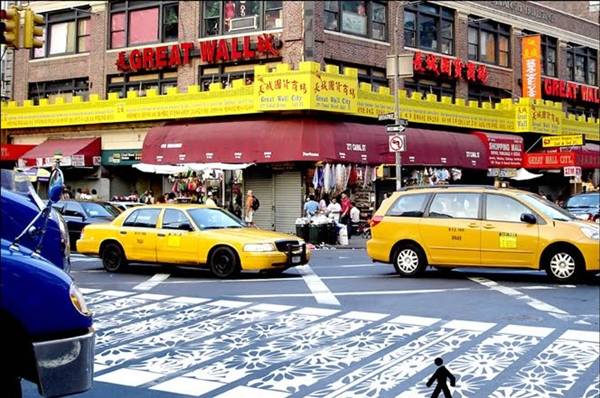 Adriano design is the brand name used by Italian brothers D Adriano and G Adriano to promote their industrial projects and products design. It is a project by these two architect brothers who aim to reinvent zebra crossings. Their goal was to make each zebra crossing individually recognizable without losing their function while fully respecting the existing regulatory requirements which would allow pedestrians to “read more information and learn the place they’re visiting”. 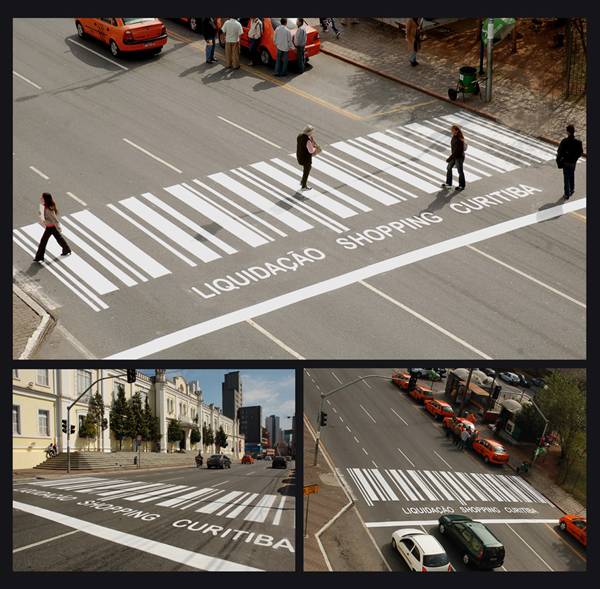 The pedestrian crossing opposite the main entrance Shopping Curitiba Franco, was painted to resemble a barcode in Brazil. The action is part of the campaign of settlement “5 Days of Madness,” created by Opus Multipla Integrated Communicating for the mall. The settlement Began on Wednesday, August 22, 2008 and ends Sunday, April 26 2008. The campaign includes two TV commercials and promotional materials for the decoration of the mall, such as banners, posters and stickers. The movie “Ticks” shows the couple with tics related to shopping at the mall. In the commercial “Mala”, an angry woman out the window a suitcase full of clothes to make room in the closet. This ad was appreciated and liked the visitors and customers and it was nominated for the best commercial awards of the year. 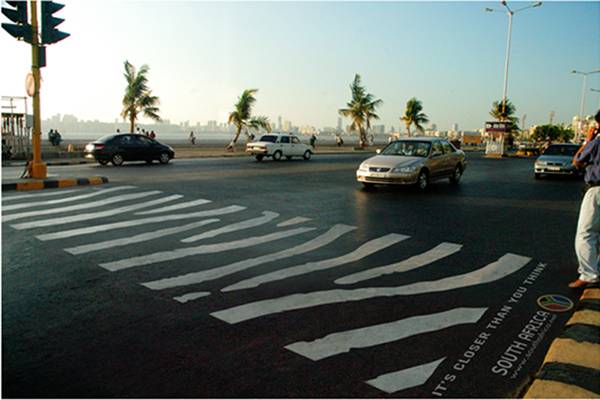 The zebra crossing signs around traffic lights in Mumbai were painted to look like the stripes of a real zebra and a clever marketing and promotion of South Africa Tourism. The contract was carried out by an agency in Mumbai, India and the idea of this advertising was to give message to the people that South Africa is closer than you think. South African Tourism has undertaken an extensive national outdoor advertising campaign to persuade the Indian travelers this summer. The campaign kicks off in 18 cities across the country – the first ever for an international tourism organization. The campaign focuses on 4 unique aspects about holidaying in South Africa – wildlife scenic beauty, safari, outdoor adventure and world-class shopping. Realizing the potential for growth from smaller regional markets, South African Tourism has chosen to also include cities such as Chandigarh, Amritsar, Jalandhar, Panchndhar, Ludhiana, Jaipur, Pune, Surat, Baroda, Mohali in addition to the bigger metros of Mumbai, Bangalore, Hyderabad, Kolkata and the NCR cities of Delhi, Noida and Gurgaon. In the key markets of Mumbai and Delhi, South African Tourism has done some unique innovations in iconic locations such as bus shelters, lamp posts and building facades with eye-catching visuals and cut-outs.

01. Crosswalk by Road worth 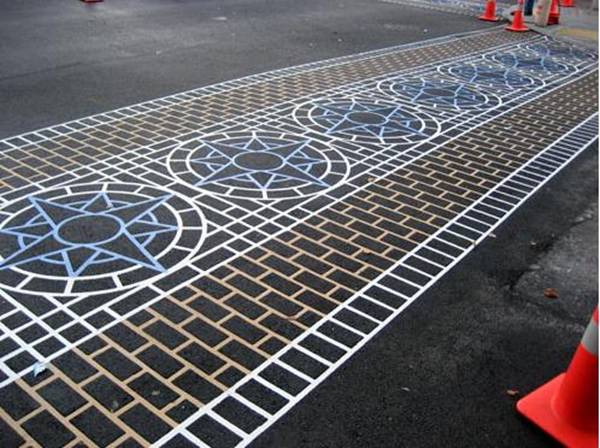 These are created by an internationally renowned street artist (Peter Gibson) who began painting the streets of Montreal and began to play with the language of the streets, overlaying city asphalt markings with his own images. Mr. Gibson started all this in 2001. He wanted less cars and more bicycles in the streets of Montreal, so he started playing around with the traffic and road signs painted in the asphalt, using a basic technique called the stencil. With his masks and paints, he started creating fun urban ‘works of art’ that, obviously, did not please everyone. Three years later, he was finally arrested for these activities and charged with 53 counts of mischief. 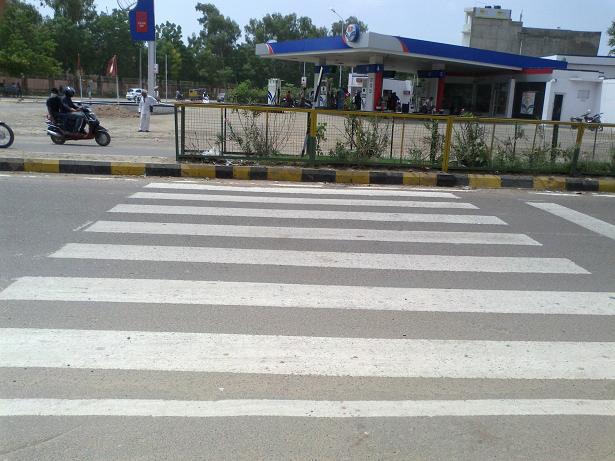 These are created by an internationally renowned, The road is 200 Ft.  This crosswalk what build by UIT Chairman Rajendra Gehlot in government of Vasundhara Raje Sindhya, CM of Rajasthan. But it was repaint in the Government of Ashok Gehlot too. People can walk on this Crosswalk but god knows where they pass on. May be people Jump on this Iron Railing .
at August 27, 2012

Email ThisBlogThis!Share to TwitterShare to FacebookShare to Pinterest
Labels: Around The World, Top Ten