Coffee from an elephant's gut fills a $50 cup 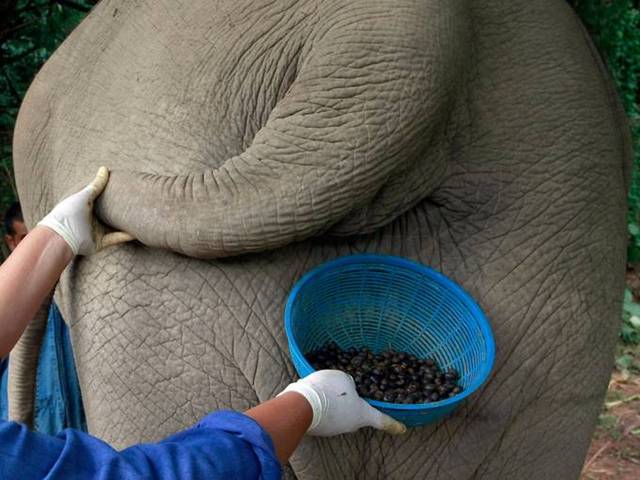 GOLDEN TRIANGLE, Thailand (AP) — In the lush hills of northern Thailand, a herd of 20 elephants is excreting some of the world's most expensive coffee.
Trumpeted as earthy in flavor and smooth on the palate, the exotic new brew is made from beans eaten by Thai elephants and plucked a day later from their dung. A gut reaction inside the elephant creates what its founder calls the coffee's unique taste. Stomach turning or oddly alluring, this is not just one of the world's most unusual specialty coffees. At $1,100 per kilogram ($500 per pound), it's also among the world's priciest. For now, only the wealthy or well-traveled have access to the cuppa, which is called Black Ivory Coffee. It was launched last month at a few luxury hotels in remote corners of the world — first in northern Thailand, then the Maldives and now Abu Dhabi — with the price tag of about $50 a serving. 05 more images after the break... 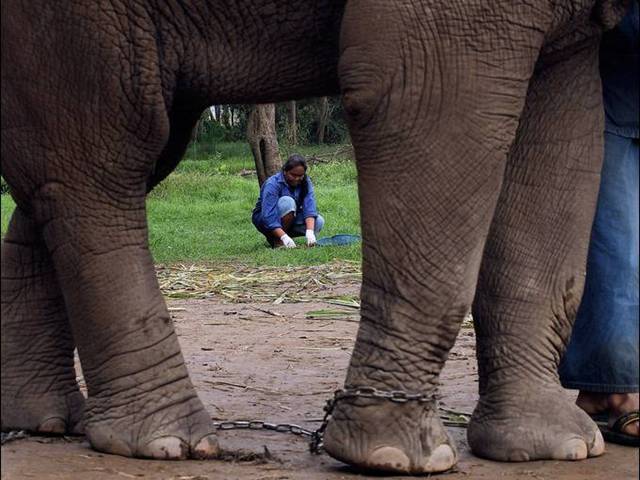 world — first in northern Thailand, then the Maldives and now Abu Dhabi — with the price tag of about $50 a serving.
The Associated Press traveled to the coffee's production site in the Golden Triangle, an area historically known for producing drugs more potent than coffee, to see the jumbo baristas at work. And to sip the finished product from a dainty demi-tasse.  In the misty mountains where Thailand meets Laos and Burna, the coffee's creator cites biology and scientific research to answer the basic question: Why elephants?
"When an elephant eats coffee, its stomach acid breaks down the protein found in coffee, which is a key factor in bitterness," said Blake Dinkin, who has spent $300,000 developing the coffee. "You end up with a cup that's very smooth without the bitterness of regular coffee."
The result is similar in civet coffee, or kopi luwak, another exorbitantly expensive variety extracted from the excrement of the weasel-like civet. But the elephants' massive stomach provides a bonus. 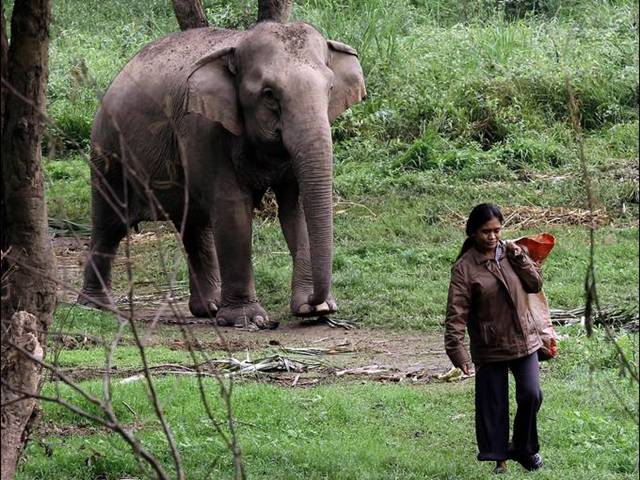 Think of the elephant as the animal kingdom's equivalent of a slow cooker. It takes between 15-30 hours to digest the beans, which stew together with bananas, sugar cane and other ingredients in the elephant's vegetarian diet to infuse unique earthy and fruity flavors, said the 42-year-old Canadian, who has a background in civet coffee.
"My theory is that a natural fermentation process takes place in the elephant's gut," said Dinkin. "That fermentation imparts flavors you wouldn't get from other coffees."
At the jungle retreat that is home to the herd, conservationists were initially skeptical about the idea.
"My initial thought was about caffeine — won't the elephants get wired on it or addicted to coffee?" said John Roberts, director of elephants at the Golden Triangle Asian Elephant Foundation, a refuge for rescued elephants. It now earns 8 percent of the coffee's total sales, which go toward the herd's healthcare. "As far as we can tell there is definitely no harm to the elephants."
Before presenting his proposal to the foundation, Dinkin said he worked with a Canadian-based veterinarian that ran blood tests on zoo elephants showing they don't absorb any caffeine from eating raw coffee cherries. 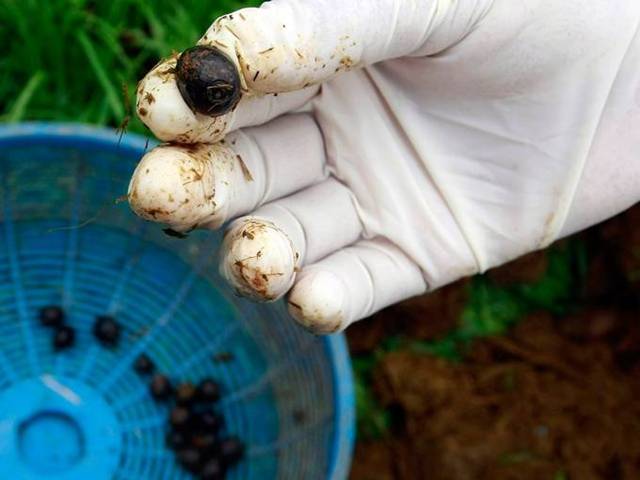 "I thought it was well worth a try because we're looking for anything that can help elephants to make a living," said Roberts, who estimates the cost of keeping each elephant is about $1,000 a month.
As for the coffee's inflated price, Dinkin half-joked that elephants are highly inefficient workers. It takes 33 kilograms (72 pounds) of raw coffee cherries to produce 1 kilogram of (2 pounds) Black Ivory coffee. The majority of beans get chewed up, broken or lost in tall grass after being excreted.
And, his artisanal process is labor-intensive. He uses pure Arabica beans hand-picked by hill-tribe women from a small mountain estate. Once the elephants do their business, the wives of elephant mahouts collect the dung, break it open and pick out the coffee. After a thorough washing, the coffee cherries are processed to extract the beans, which are then brought to a gourmet roaster in Bangkok.
Inevitably, the elephant coffee has become the butt of jokes. Dinkin shared his favorites: Crap-accino. Good to the last dropping. Elephant poop coffee.
As far away as Hollywood, even Jay Leno has taken cracks.
"Here's my question," Leno quipped recently. "Who is the first person that saw a bunch of coffee beans and a pile of elephant dung and said, 'You know, if I ground those up and drank it, I'll bet that would be delicious.'" 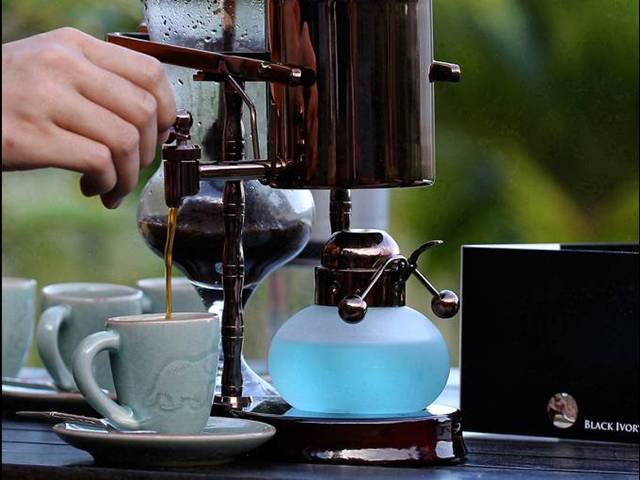 Jokes aside, people are drinking it. Black Ivory's maiden batch of 70 kilograms (150 pounds) has sold out. Dinkin hopes to crank out six times that amount in 2013, catering to a customer he sees as relatively affluent, open-minded and adventurous with a desire to tell a good story.
For now, the only places to get it are a few Anantara luxury resorts, including one at the Golden Triangle beside the elephant foundation.
At sunset one recent evening in the hotel's hilltop bar, an American couple sampled the brew. They said it surpassed their expectations.
"I thought it would be repulsive," said Ryan Nelson, 31, of Tampa, Florida. "But I loved it. It was something different. There's definitely something wild about it that I can't put a name on."
His wife Asleigh, a biologist and coffee lover, called it a "fantastic product for an eco-conscious consumer," since the coffee helps fund elephant conservation.
But how does it taste?
"Very interesting," she said, choosing her words carefully. "Very novel."
"I don't think I could afford it every day on my zookeeper's salary," she said. "But I'm certainly enjoying it sitting here overlooking the elephants, on vacation." 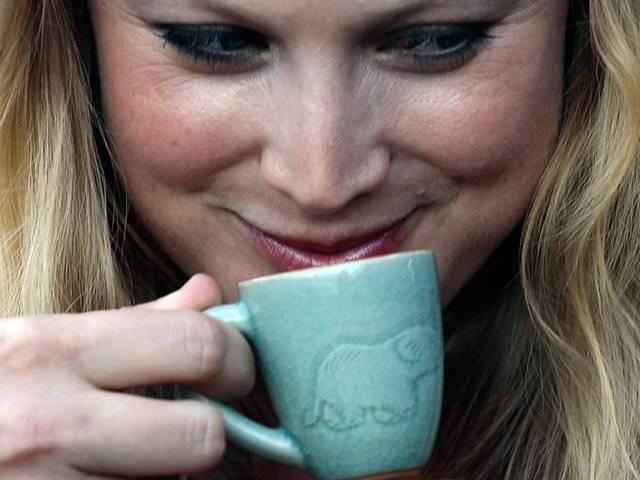