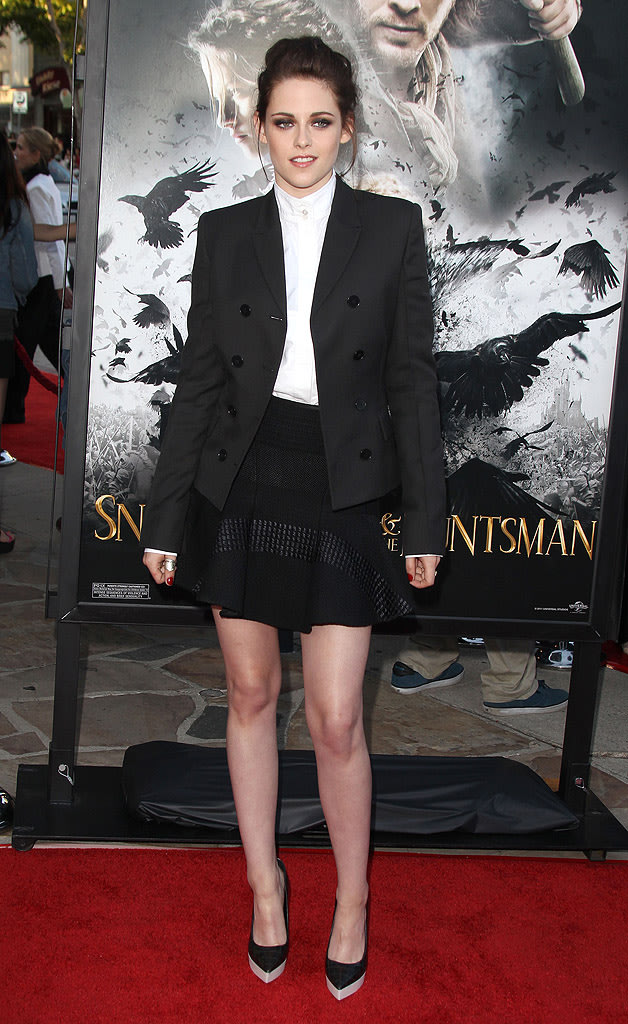 Kristen Stewart rocked an equestrian-like look upon arriving at a "Snow White and the Huntsman" industry screening in L.A. on Tuesday night. The 22-year-old actress -- who was outfitted by designer Stella McCartney -- paired a high-collar blouse with a black blazer and matching mini skirt. A loose updo, smokey eye makeup, and two-tone platform pumps completed her youthful yet chic ensemble. (5/29/2012) 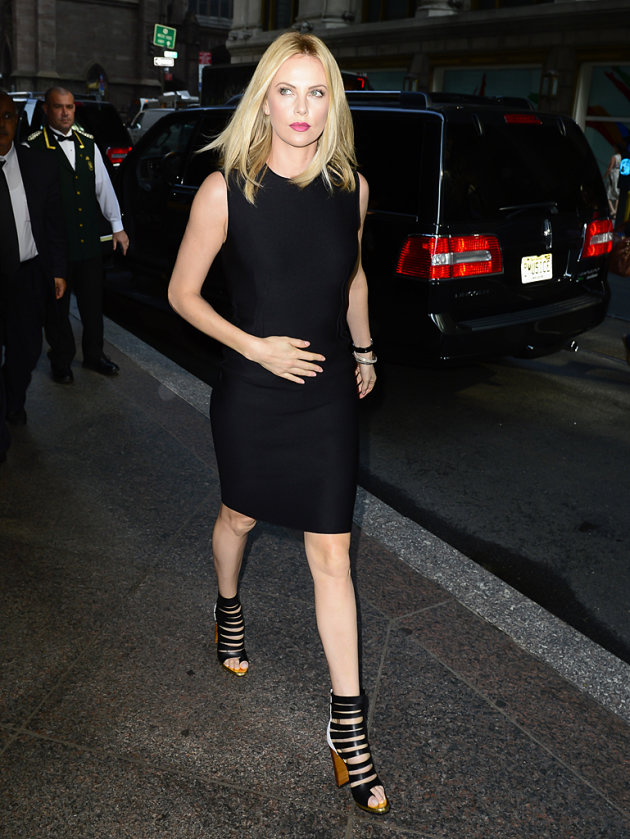 Earlier that day, Stewart's on-screen nemesis, Charlize Theron (aka The Evil Queen), looked stunning in an all-black getup as she headed to a taping of "Today" at Rockefeller Center. While we like her sophisticated Lanvin sheath, we love her sexy Christian Louboutin ankle boots, which retail for a whopping $1,300! (5/29/2012) 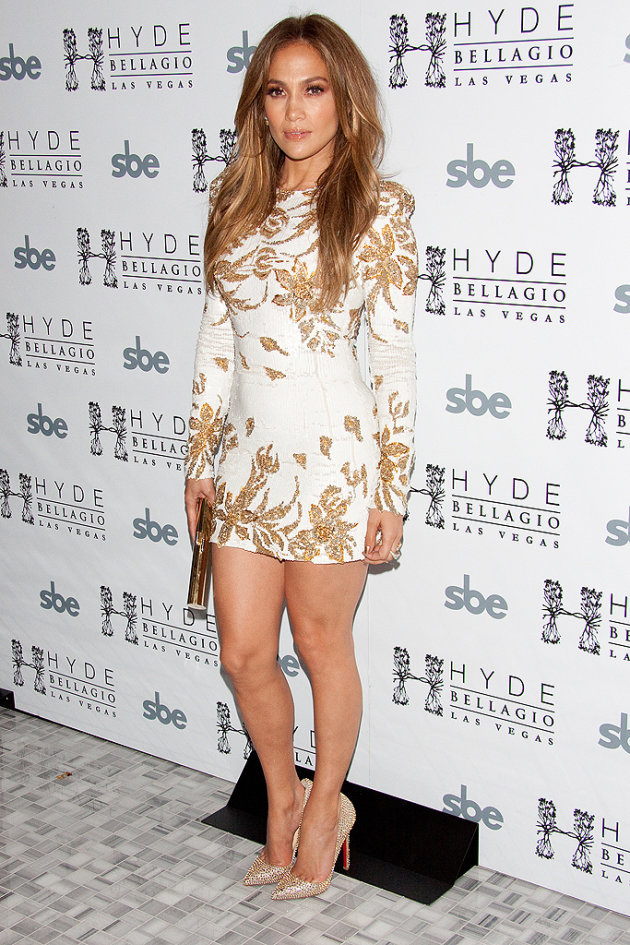 "American Idol's" latest installment came to a conclusion just last week, but that doesn't mean J.Lo is ready to step out of the spotlight. Over the weekend, she made a special appearance in Sin City to celebrate the launch of her new single, "Goin' In." For the occasion, the diva extraordinaire donned a Zuhair Murad mini dress, which featured long sleeves and gold-sequined leaves, along with sparkly Louboutin heels. (5/26/2012) 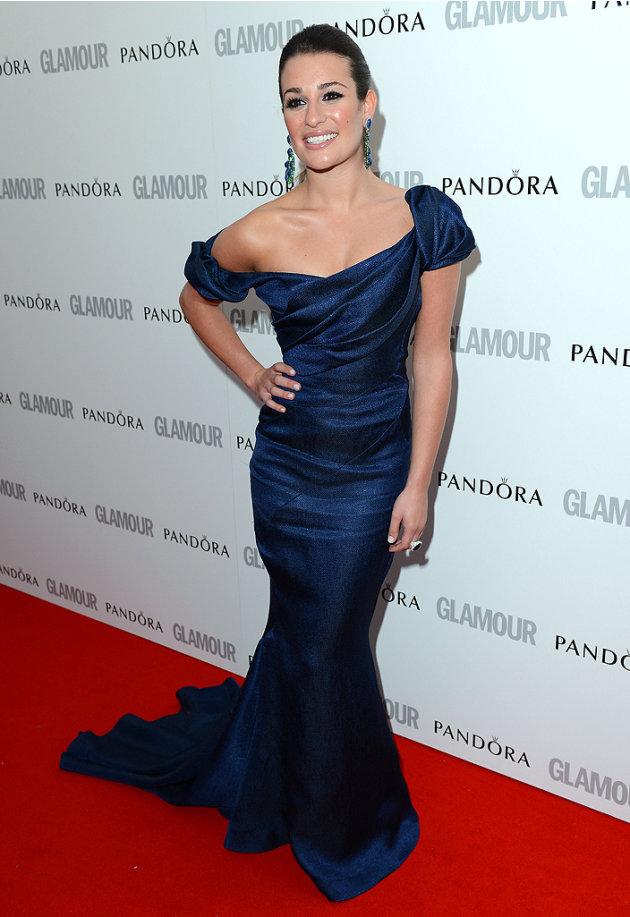 Meanwhile, at the Glamour Magazine Women of the Year Awards in London, Lea Michele struck a pose in Zac Posen. The "Glee" cutie -- who was named U.S. Actress of the Year -- oozed elegance by accessorizing her sapphire gown with a cocktail ring and statement earrings courtesy of Lorraine Schwartz. (5/29/2012) 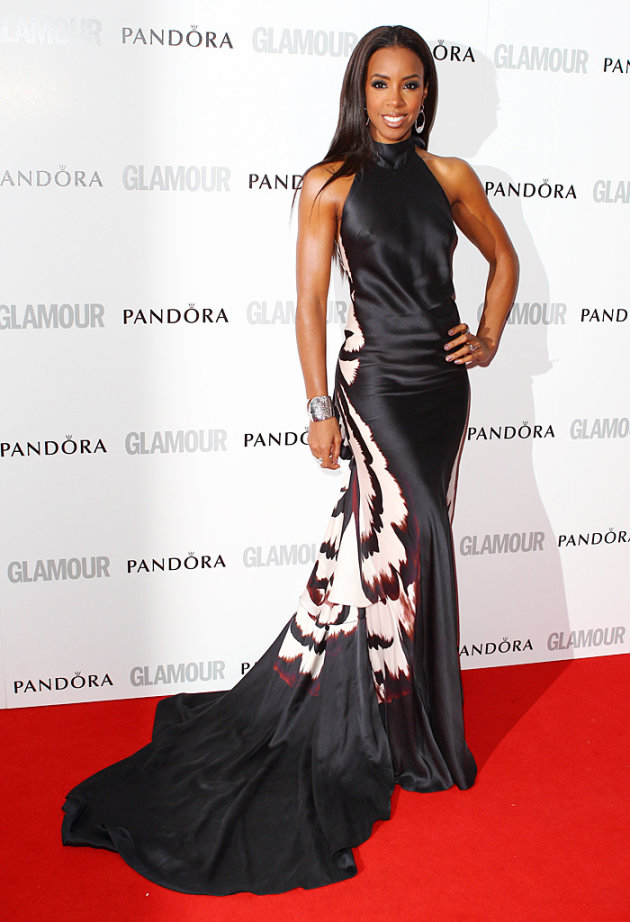 Following in Lea's footsteps was former Destiny's Child member, Kelly Rowland, who looked better than ever at the star-studded soiree in a Maria Grachvogel halterneck gown, which featured a lengthy train and an equally dramatic pattern on the back. What do you make of Ms. Rowland's frock? Hot or not? (5/29/2012) 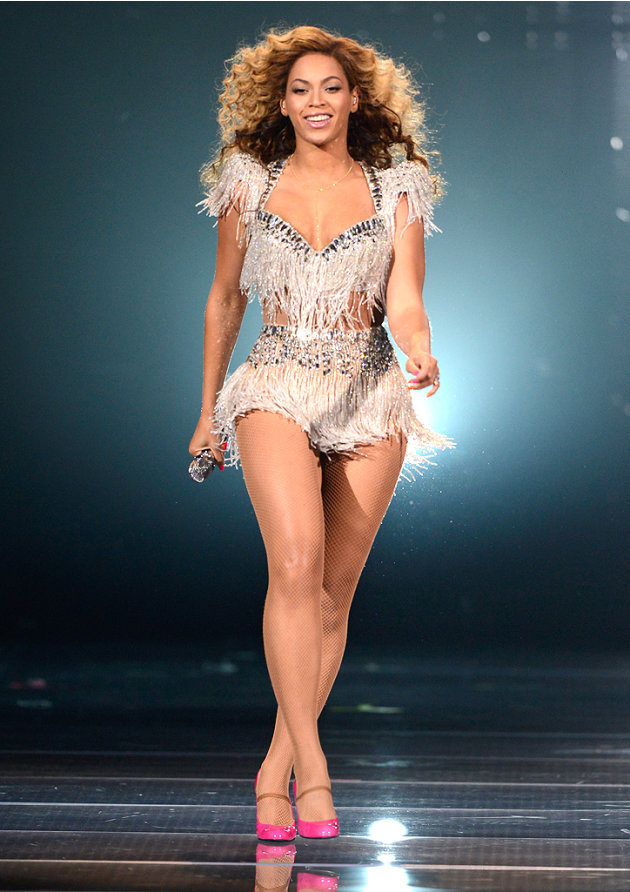 Last Friday, Kelly's ex bandmate, Beyonce, hit the stage in Atlantic City for the first time since giving birth to baby Blue Ivy in January. Looking as (Sasha) fierce as ever, the singer slammed through an entertaining set while wearing this custom-made, Swarovski crystal-encrusted Ralph & Russo piece and hot pink Stuart Weitzman shoes. (5/25/2012) 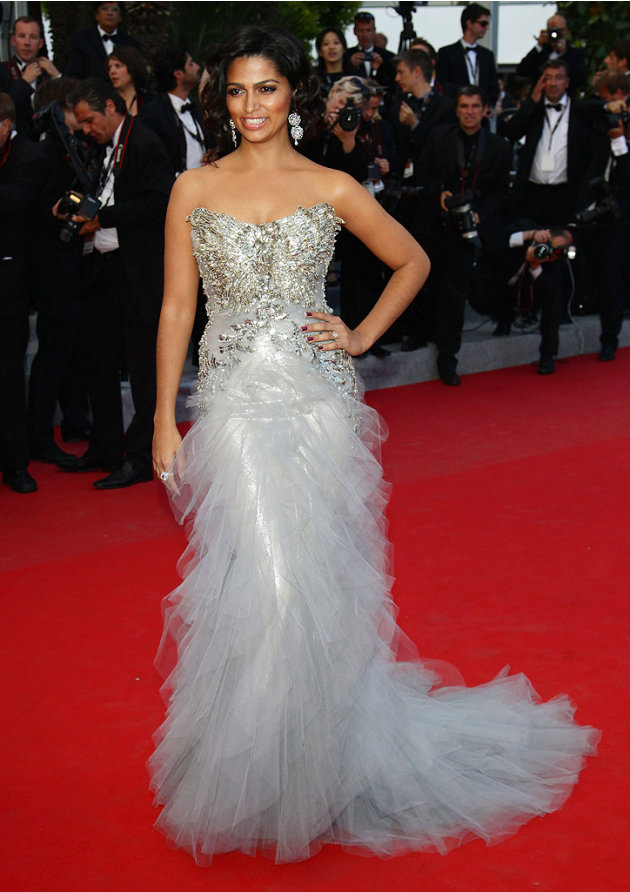 Across the Atlantic -- at the Cannes Film Festival premiere of "Mud" -- Matthew McConaughey's fiancee, Camila Alves, dropped jaws in this Marchesa masterpiece. A wavy 'do and diamond accents gave the Brazilian beauty an extra ounce of va-va-voom. (5/26/2012) 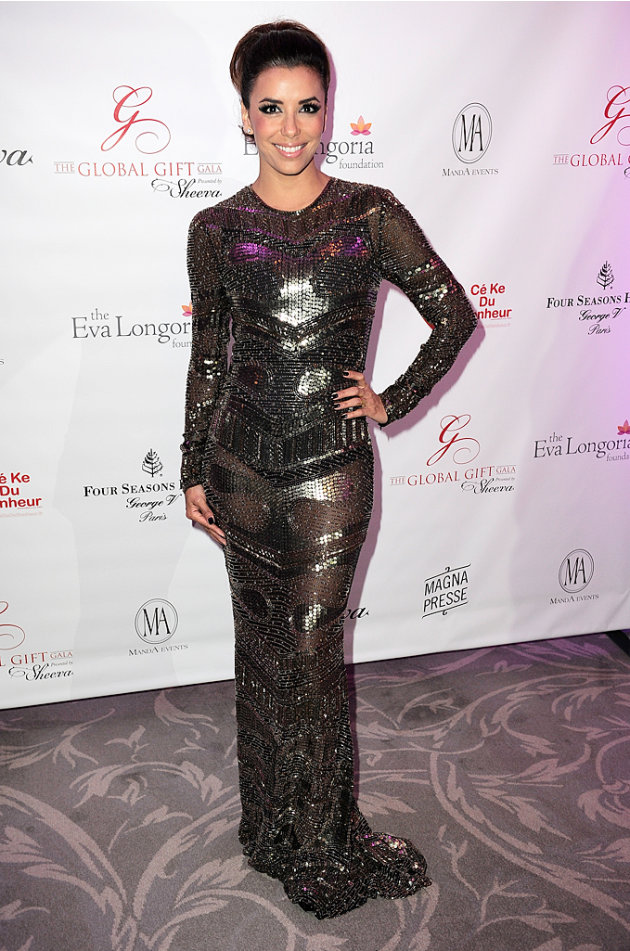 Also photographed in the South of France was "Desperate Housewives" alumna Eva Longoria, who wore this slinky Reem Acra dress to the annual Global Gift Gala. Diamond studs and a smile made for the perfect accessories. (5/28/2012) 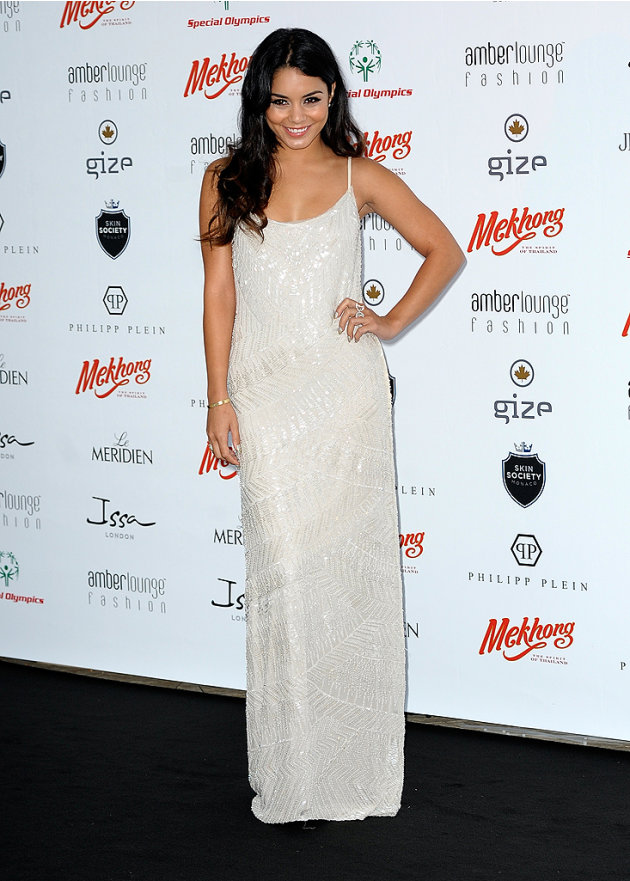 Vanessa Hudgens looked incredibly mature as she made her way down the arrivals line in an Alberta Ferretti frock at a recent charity event in Monaco. Can the former "High School Musical" hottie keep it up, or will she land in our What Were They Thinking?! gallery in the coming weeks? Discuss! (5/25/2012) 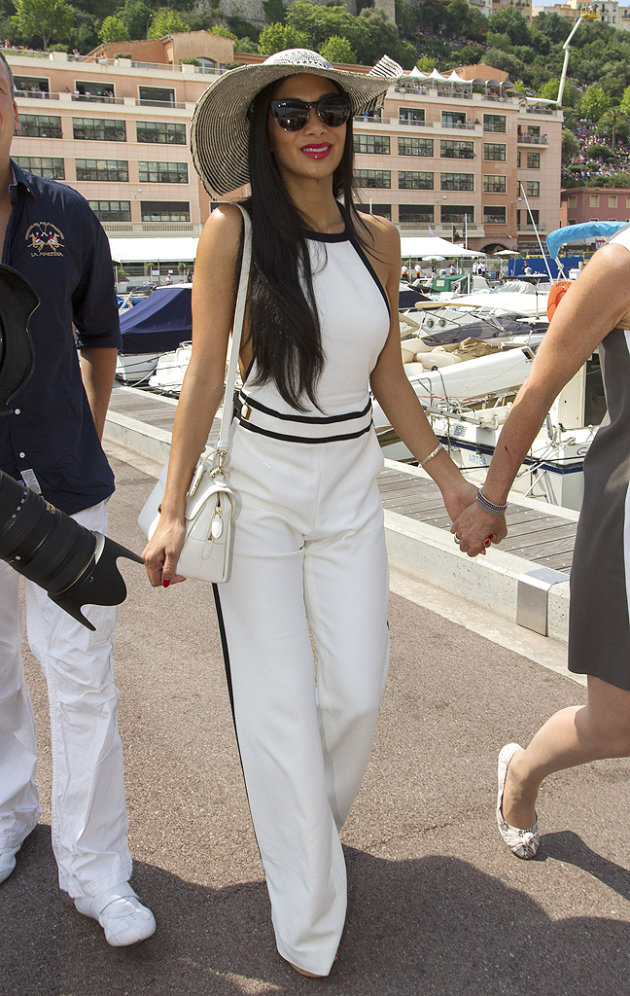 And last but not least we have Nicole Scherzinger, who combined two of my all-time fave trends -- nautical-themed apparel and jumpsuits -- while supporting her racing buff beau at the Monte Carlo Grand Prix. Yes, the floppy sun hat and matching Louis Vuitton purse are a bit much, but she's a Pussycat Doll, so it's to be expected. (5/27/2012)
at May 31, 2012